This page provides information about the Trafodion architecture.

Trafodion provides an operational SQL engine on top of Hadoop – a solution targeted toward operational workloads in the Hadoop Big Data environment. Included are: 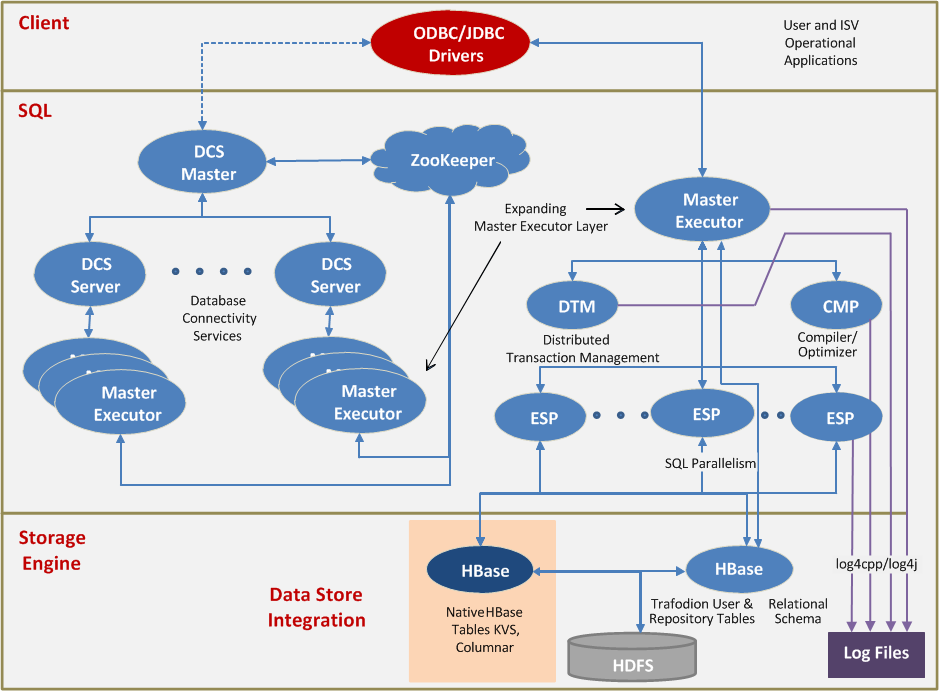 The figure above should be interpreted as follows:

The Database Connectivity Services (DCS) framework enables applications developed for ODBC/JDBC APIs to access a Trafodion SQL database server. DCS is a distributed service. It uses the underlying HBase ZooKeeper instance for its definition of a cluster. Apache ZooKeeper is a centralized service for maintaining configuration information, naming, providing distributed synchronization, and providing group services. All participating nodes and clients need to be able to access the running ZooKeeper.

DCS is a collection of components:

There is on Distributed Transaction Manager (DTM) process per node in a cluster running Trafodion. The DTM process owns and keeps track of all transactions that were started on that node. (In HBase-trx, transactions were tracked in the library code of each client, which meant that after a server failure, there was no way to restart the transaction manager for in-doubt transactions.)

When a Trafodion Executor process issues an HBase call, the modified client-side HBase-trx library can deduce which TM owns the transaction from the transaction ID, and registers itself with that TM if it has not already done so. Thus, at any given moment in time, a TM is aware of what processes are participating in a transaction.

The original HBase-trx library worked by extending certain Java classes in the region server. Our implementation has for the most part changed to execute this library in co-processors. This allows better extensibility at the HBase level. With a class extension approach, only one feature could extend the HBase code. With co-processors, it is possible to host several extensions. Endpoint and observer co-processors perform the resource manager role in transaction processing.

The Trafodion Compiler translates SQL statements into query plans that can then be executed by the Trafodion execution engine, commonly called the Executor.

The Compiler is a multi-pass compiler. Each pass transforms a representation of the SQL statement into a new or augmented representation which is input to the next pass. The sections below give more detail on each pass. The logic that calls each pass is in the CmpMain class, method CmpMain::compile. You can find that logic in file $TRAF_HOME/sql/sqlcomp/CmpMain.cpp.

A copy of the compiler code runs in the Master process, which avoids inter-process message passing between the Compiler and Executor. At the moment the compiler code is not re-entrant, but it is a serially reusable resource within the Master. Some processing is recursive. For example, the execution logic for DDL statements is packaged with the compiler code. When we execute a DDL statement, the Executor spawns a separate Compiler process to execute that logic. For another example, the UPDATE STATISTICS utility dynamically generates SQL SELECT statements to obtain statistical data. Since we are not re-entrant, we spawn a separate Compiler process for this recursive processing.

The compiler is written in C++.

The parser pass performs lexical and syntactic analysis, transforming the SQL statement into a parse tree. Trafodion uses a hand-coded scanner for lexical analysis of UCS2 strings. (UTF-8 encoding for SQL statement text is supported but is translated to UCS2 internally).

The parser grammar is implemented as a set of Bison rules. The output of the parser is a tree of objects of class RelExpr, representing relational operators. Scalar expressions are represented by trees of ItemExpr objects, which are contained in the nodes of the RelExpr tree. This common model to represent a query is used throughout the compilation process.

The binder pass takes the parse tree and decorates it with metadata information. All references to SQL objects (tables, views, columns and so on) are bound to their respective metadata. The binder also performs type synthesis. At this stage, errors such as the wrong data type being passed to a function call or that a column reference doesn’t belong to any of the tables in scope are detected.

The binder also manages a cache of query plans. If the binder detects that the new SQL statement is similar to one previously compiled, it simply reuses the earlier query plan (modifying parameters as needed), bypassing subsequent compiler passes. This can be significant as optimization is often the most expensive compilation phase.

The SQL language is rich in redundancy. Many concepts can be expressed in multiple ways. For example, sub-queries can be expressed as joins. The DISTINCT clause can be transformed into GROUP BY. The normalizer pass removes this redundancy, transforming the parse tree into a normalized representation in the following steps.

It is a top-down optimizer; that is, it generates an initial feasible plan for the query, then using rules, transforms that plan into semantically equivalent alternatives. The optimizer computes the cost of each plan, and uses these costs to bound its search for additional plans using a branch-and-bound algorithm. This is in contrast to classical, dynamic programming-style optimizers, that build up a set of plans “bottom-up”, by first considering all one-table plans, then joins of two tables, then joins of three tables and so on.

The optimizer itself is multiple passes, some of which can be bypassed depending on the optimization level chosen for the compile. The first pass simply generates the initial feasible plan. Subsequent passes apply successively richer sets of rules to traverse the search space. For example, we first consider only hash joins, and in later passes introduce the possibility of nested or merge joins.

Search spaces in general are exponential in size. So the optimizer is rich in heuristics to limit where it searches. The optimizer also takes into account variation: Estimations of cost for individual relational operators will be imperfect; the optimizer tries to pick plans that degrade gracefully if estimates are off the mark.

The pre-code generator performs unconditional transformations after the optimization phase. References to elements of an equivalence class are replaced with the most efficient alternatives.

The generator pass transforms the chosen optimized tree into a query plan which can then be executed by the Executor. Low-level optimizations of scalar expressions take place here. Many scalar expressions are generated in native machine code using the open source LLVM infrastructure. For those scalar operators where we have not yet implemented native expression support, we instead generate code that is interpreted at run time.

In order to make heap management efficient, the Compiler uses heap classes, NAHeap, that it shares with the executor. One heap, the Statement heap, is used for objects that are particular to a given SQL statement’s compilation, for example, parse tree nodes. At the end of statement compilation, we simply destroy the heap instead of calling “delete” on each of possibly thousands of objects. Another heap, the Context heap, is used for objects that may be reused across SQL statements. For example, metadata is cached within the compiler. As one can imagine, considerable care goes into selecting which heap to use when creating a given object, to avoid dangling references and other resource leaks. For example, access to a given file must be encapsulated in an object on the global heap, since on the statement heap we cannot count on execution of the destructor to close the file.

The Compiler captures error information into a ComDiagsArea object. The style of programming is to return on errors rather than throw exceptions. Calling logic then checks for the presence of errors before continuing. So, for example, the main logic that invokes each compiler pass checks for errors before proceeding to the next pass.

The Trafodion Executor implements a data-flow architecture. That is, each relational operator is implemented as a set of tasks which are scheduled for execution. Operators communicate with each other using queues.

A query plan consists of a collection of fragments, each fragment being a portion of the query plan executed in a given process. Each fragment in turn is a tree of relational operators. A relational operator may in turn be decorated with additional scalar expressions. Relational operators in the query plan are represented by two class hierarchies, ex_tdb and ex_tcb. The ex_tdb (tdb = “task descriptor block”) hierarchy contains the compiler-generated state for the operator. The ex_tcb (tcb = “task control block”) hierarchy contains the run-time state for the operator. So, for example, the queue objects are pointed to by ex_tcb objects.

An IPC layer, shared with other components such as the compiler, abstracts the (asynchronous) communication of objects across process boundaries. The sorts of things that flow are query plan objects, data rows, and error objects (ComDiagsArea).

At the highest level of the Executor is the Call Level Interface (CLI) layer. This layer implements an ODBC-like interface to the Executor. Connectivity code communicates to the Executor using this interface. The CLI layer keeps track of such abstractions as SQL statements and cursors. It also provides an interface to retrieve SQL diagnostics.

The Executor also uses the NAHeap classes for heap management. Again, there are statement heaps for objects local to a given SQL statement, and a global heap for objects that exist across statements.

The Executor too uses the ComDiagsArea classes for error management. Like the Compiler, the programming style relies on returns rather than exceptions; calling code is expected to check for the existence of errors and respond appropriately.

The Executor also collects statistics concerning the execution of a particular query. These statistics are available at the CLI interface at the conclusion of statement execution.